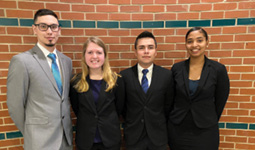 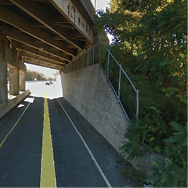 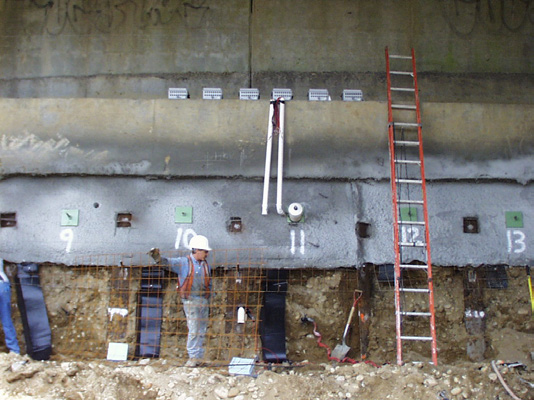 ConnDOT built their first permanent soil nail wall in 2002 to allow for construction of an I-95N on ramp below an existing I-95 overpass in the City of Groton. The soil nail wall is located below a perched, h-pile supported stub abutment and was needed for permanent lateral earth support of the excavation below the existing perched abutment. As this was ConnDOT’s first permanent soil nail wall, the design was very conservative and did not account for soil arching between h-piles. Soil arching is a phenomenon describing stress redistribution due to relative movement between adjoining soil masses. For this project our team was hired to complete a post-construction analysis for the existing soil nail wall. To aid in recreating the design we were given the task of restructuring the design using ASD code and SNAP2 software. The tensile loads on the nails calculated by our SNAP model were compared to the actual loads acting on the nails that had been measured by instrumentation. The SNAP model was then adjusted to account for the soil arching effect between the h-piles. Three alternatives were explored to mimic the effect of arching. These included surcharge load reductions, lower unit weights of retained soils, and adding false cohesive strengths to retained soils. We also constructed a 3-D model to demonstrate how soil nail walls work.