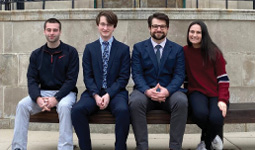 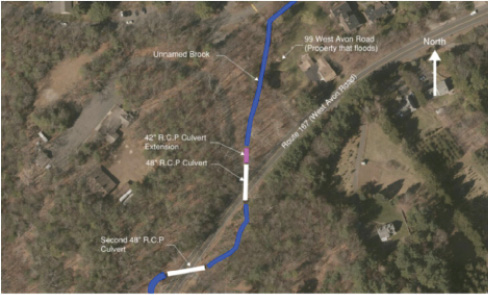 In Farmington, Connecticut, the Lions Club property along Route 167 had been experiencing frequent flooding for several years due to an ineffective system of culverts. Three culverts in a sequence became unable to handle the peak flow rates of the watershed area, most likely because the third culvert had a smaller diameter than the previous two. After a thorough investigation of the hydrology of the watershed and hydraulic capacities of the culvert system, it has been decided to replace the smaller culvert with a larger culvert. Since the other two culverts in this area are comprised of 48” reinforced concrete pipe, the smaller culvert will be replaced with identical components. The increase in pipe diameter reflects the need for a greater flow capacity, which will help alleviate further flooding in the area. After the new culvert is installed, the length of road between the two culverts will be milled and repaved. Guide rails adjacent to each culvert opening will also be replaced with a new rail type that is more appropriate for the roadway conditions.