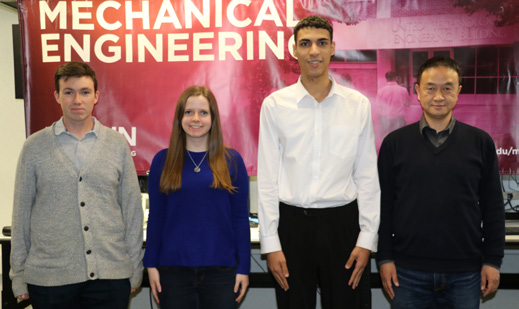 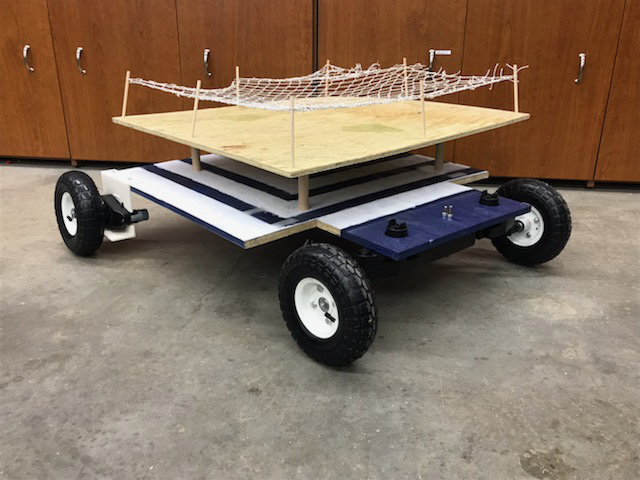 ThayerMahan is a world leader in maritime surveillance, designing, and manufacturing systems which collect acoustic and electronic information from the world’s oceans. The company uses unmanned air vehicles (UAVs) for collecting data, however there are currently no efficient methods of retrieving UAVs once they have been sent on water missions. ThayerMahan has tasked ME56 to construct an unmanned ground vehicle (UGV) under the guidance of sponsor advisor Alex Lorman and faculty advisor Professor Chengyu Cao. The UGV is utilized to develop a method for autonomously landing a UAV on a stationary target without the risk of experiencing water damage before it attempts to land on an unmanned surface vehicle (USV) in the ocean. ME56 addressed the problem by constructing the UGV from a sheet of plywood with two front wheels attached to a steering axle and two rear wheels each driven by a brushed DC motors. To prevent the UAV from sliding off the UGV once it has landed, legs were attached underneath the UAV that poke through a net suspended above the UGV’s platform as a retention method. Both the UGV and UAV communicate through RTK (real-time kinematic) GPS to locate the ground vehicle with minimal error. ThayerMahan can then replicate the drone retention method and landing algorithm on their USVs out in the oceans, making the UAVs retrievable for multiple missions.