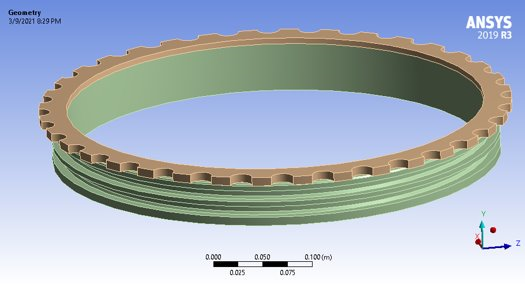 Aero Gear is working on producing large scale ring gears for use in aerospace engine components.  Their main problem in this production is distortion caused by quenching.  To reduce the distortion present they have commissioned the development of a fixture to support the ring gear during heat treatment referred to as a quench plug.  The quench plug is required to help maintain the tolerances of the ring gear during the heat treatment cycle and be reusable over a large amount of heat treatments.  To accomplish this the quench plug must expand and contract at a greater rate than the ring gear to produce interference the gear during heating and be removed after cooling.  Three materials were researched and tested to determine whether their thermophysical and material properties would fulfill the criteria.  The material’s creep behavior was one such property that was researched to determine if extended cycling of the quench plug would cause permanent deformation resulting in improper interference.  The desired interference was based on the dimensions of the quench plug design and the thermal expansion coefficient measured experimentally.  The dimensions of the quench plug were chosen based on a thermomechanical model produced by the mechanical engineering team.  This model applied the material’s properties to a simulation of the heat treatment process allowing for calculation of required thickness of the quench plug.